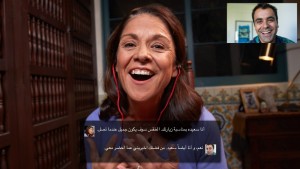 … we are releasing Modern Standard Arabic (MSA) which is used in the Middle East and Northern Africa as a standard form of the Arabic language. Unlike dialects which may vary greatly from country to country, MSA is used throughout the Arab-speaking world in written and formal communications. This version of Arabic is taught in schools and used by journalists, for example.

TechCrunch reports that the Skype team

decided to add Arabic in part because it wanted to help refugees communicate.

In addition to helping refugees, though, Microsoft also argues that support for Arabic will help second-generation children talk to their extended families and educational institutions bring in knowledge from other cultures.

So far people who tested this feature are reporting problems with the translation from and to Arabic. Previous reviews also noted that the translator cannot detect words spoken in different languages from one speaker. For example if the speaker language is set to Spanish and he decided to use few English words, the transcript will be not accurate.  That is why we stand by our previous post and we will not be impressed until Skype can translate some of our awesome Lebanese language. Yalla ciao see you !!